Hi! I know I’ve been gone for a long while, I’m still recuperating from surgery and my internet has been the shite lately. We also moved during this time, so I have been slowly making it back to my beloved sl. Now I really wanted to blog but with my ping at 114 and speeds at 12, I have not been able to work on Ultra or even High graphics. But I still took a few photos last month anyway in lower graphics……….oh no she didn’t!  lol This one I am going to post anyway yes?

These newer items were for last months Collabor88, so I’m a tad behind but I am sure you can go into each store and nab these items if you haven’t already. I was actually pretty fed up with my cable company the last few months with horrible internet speeds, having them out 8 times to fix my lines, then actually being told to go to a competitor at the end. Then we ended up switching condos in February(same area) and having an awesome tech who came out and could not believe what was happening to a 15 year ongoing customer, and fixing me right up to better than today’s speed standards. I felt like crap for a while and didn’t want to stand up and argue and get pissed. So I had it in my head that I was done with this company if my service continued to this extent. I took this photo the night before the change and even though I stood there the next day and told the very nice and very forgiving tech ( :/) off, I stood my ground and felt so good about myself that I saved this photo with thoughts of  ‘screw you, make me!’  lol Sometimes it’s the little battles that matter the most yes? Don’t take any shit ever 🙂  hmmm unless you’re the tech of the person who’s been paying for top of the line speeds and is getting the shaft…….then maybe it’s ok 😉 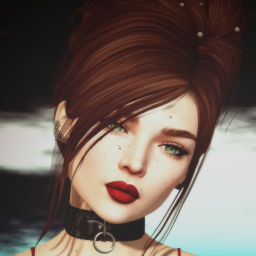 11 years old and counting and still wearing boxes, deleting my houses and of course loving SL ☺
“Style is knowing who you are, what you want to say, and not giving a damn.” ~Gore Vidal

Second Life® and Linden Lab® are trademarks or registered trademarks of Linden Research, Inc. All rights reserved. No infringement is intended.